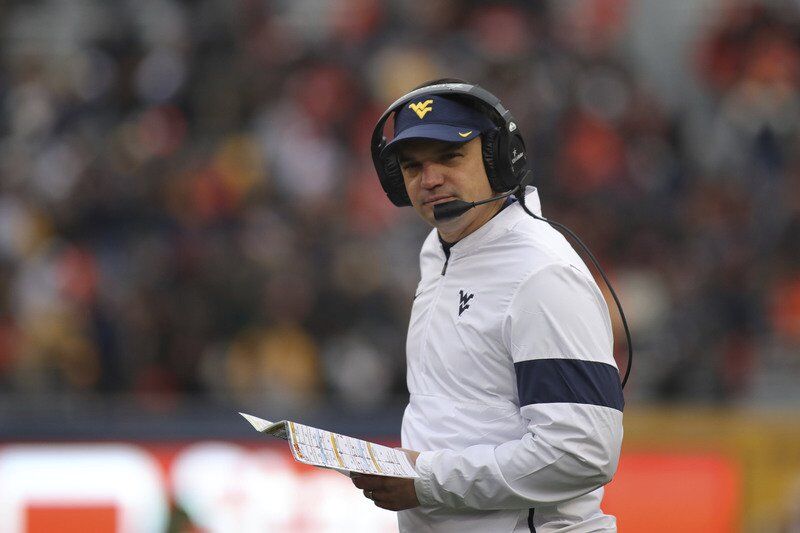 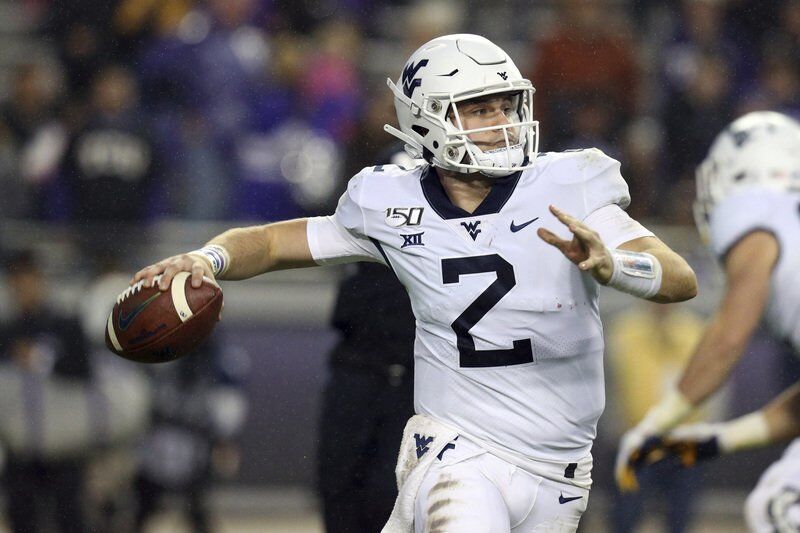 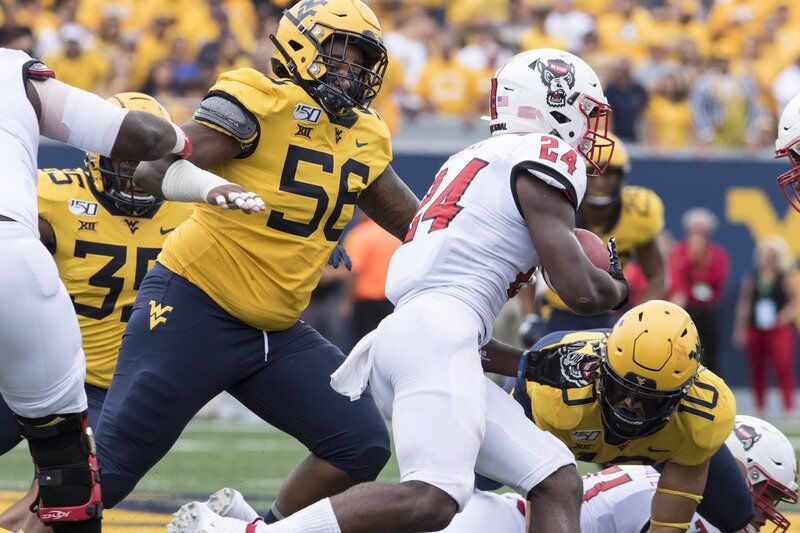 West Virginia defensive lineman Darius Stills (56) chases a North Carolina State runner during a game in Morgantown, W.Va., on Sept. 14, 2019. Stills had 14.5 tackles for loss and seven sacks last year, helping a rebuilding team put a up respectable five victories. At 6-1, 285, he isn't the typical hulking nose guard, but few linemen in the country are tougher to block. 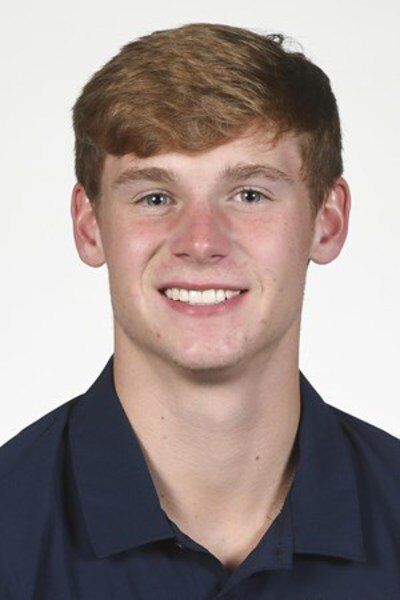 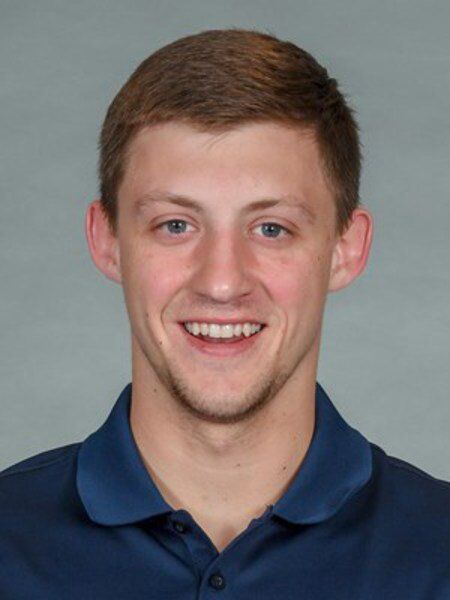 West Virginia defensive lineman Darius Stills (56) chases a North Carolina State runner during a game in Morgantown, W.Va., on Sept. 14, 2019. Stills had 14.5 tackles for loss and seven sacks last year, helping a rebuilding team put a up respectable five victories. At 6-1, 285, he isn't the typical hulking nose guard, but few linemen in the country are tougher to block.

Before the 2019 campaign, Brown — in his first year as the Mountaineers’ 35th head coach and Dana Holgorsen’s replacement — put his faith in Oklahoma transfer Kendall, who started 3-1 but got the ax following a five-game losing stretch in Big 12 play.

Doege, a Bowling Green transfer, capped off the season with upset road wins over Kansas State and TCU, making him a slight favorite to come out on top in this camp’s QB spar.

On Sept. 3, Brown did what most expected, naming Doege the starter for today’s season and home opener with Eastern Kentucky.

“We had a long quarterback battle and we really feel like we have two quarterbacks on our roster that can win Big 12 games right now, which I think is a huge positive,” Brown said on his weekly radio show on Mountaineer Sports Network. “We hoped the competition was going to go through the spring and we would be able to name a starter a little earlier but it didn’t work out that way.

“We went three weeks into camp, had two true scrimmages and one kind of partial scrimmage, and after that Jarett Doege will be our starter heading into the Eastern Kentucky game. He won the job.”

Kendall started off last year well against the softer portion of the schedule — James Madison, NC State and Kansas, but a stretch of rough outings came to a head in a 38-17 blowout loss to Texas Tech at home, after which he became Doege’s backup. Kendall had a decent stat line, completing 187 of 304 attempts for 1,989 yards, 12 touchdowns and 10 interceptions.

But Doege performed much better in his limited chances, doing so against a treble of respectable defenses. The Lubbock, Texas, native connected on a higher percentage of throws, 79 of 120, and threw for 818 yards. He had 7 TDs to just 3 INTs.

Doege will have some time to get into the swing of things with the tune-up game against the Colonels and then a bye week before heading to Stillwater, Oklahoma, to take on Oklahoma State.

Following a 5-7 opening campaign, Brown will only have 10 chances this year to improve upon that mark with nonconference games against Florida State and Maryland nixed due to COVID-19.

In Brown’s second year at Troy, where he coached from 2015-18, he orchestrated a six-win turnaround from a 4-8 freshman season to a 10-3 record the following campaign. It’ll be a tall order to replicate that same success with this year’s Mountaineer squad, but WVU does have some potential on both sides of the ball.

Here’s a breakdown of their roster:

Former Fort Hill standout Danny King begins his career at WVU as a preferred walk-on, but he’s not the lone area representative on the special teams unit.

Redshirt senior Evan Staley (Hampshire) returns as the go-to placekicker after making 11 of 17 tries last year in nine games; he missed three with a leg injury. The former Trojan is 33 of 44 for his college career, which puts him at No. 7 in school history for career field goals made.

King was the Times-News All-Area team kicker for the third year in a row following his senior campaign. He converted all 65 of his extra-point tries and 3 of 7 field goals.

As a recruit, he was listed as a “five-star kicker” and third-best nationally by the Kornblue Kicking camp, but he likely won’t get much of an opportunity in his first year in Morgantown with Staley ahead of him on the depth chart.

With Vic Koenning and WVU parting ways amidst accusations of “mistreatment and racism,” Brown elected not to formally announce a replacement, instead proclaiming the defense would share responsibilities by committee.

One byproduct of that decision is that Jeff Casteel, who served as the Mountaineer defensive coordinator from 2001-2011, was promoted to an on-field role as the linebackers coach. With more than 30 years of experience and three BCS Bowl victories, his promotion figures to give the defense some much-needed leadership after Koenning’s departure.

A year ago, West Virginia’s defense played well in spurts. It gave up 42 points to Texas, 38 to Iowa State and 52 to Oklahoma during a poor stretch in the middle of the season. Yet it finished strong, allowing 20, 20 and 17 points to Kansas State, Oklahoma State and TCU, respectively, to close out the regular season.

With the exception of losing starting corners Hakeem Bailey and Keith Washington to graduation, the Mountaineers return most of their production.

The defensive line is likely the strongest unit on the entire squad with All-Big 12 Preseason Defensive Player of the Year and Third Team All-American Darius Stills back at defensive tackle. The 6-1, 292-pound senior from Fairmont had 43 stops — 12 for loss, and six sacks in 2019.

His brother Dante Stills has garnered a reputation as a dominating force on the defensive line in his own right. Despite starting just three games, the junior had 14 tackles for loss and eight sacks.

Alabama transfer VanDarius Cowan is a wildcard at the bandit position. The No. 83 overall recruit coming out of high school has significant upside when healthy, something he wasn’t able to stay last year after suffering a season-ending knee injury against Iowa State.

Redshirt freshman linebacker Jared Bartlett will also get some looks at bandit in his first full year of action. He had nine tackles in four appearances last season.

The secondary is a blend of knowns and unknowns with Bailey and Washington gone, which is a cause for concern given it was the 2019 Mountaineers’ worst unit on the defense. It gave up 247.5 yards a game through the air, the fourth-worst in the conference and 95th-worst mark in the country.

At corner, Nicktroy Fortune is a lock to be a replacement on one side, as he played in 11 games as a true freshman.

Dreshun Miller reportedly threatened for a starting spot last camp after transferring from Eastern Arizona College — before a season-ending injury derailed his campaign before it had much of a beginning — so he could be the other pick at cornerback.

The safeties, however, bring back a lot of experience. Tykee Smith and Sean Mahome return. Mahome led the team with 77 stops. Starting safety K.J. Martin was poised to have a big season after a solid freshman campaign, but he chose to opt-out last month citing health concerns.

His exit is somewhat ironic, given his initial accusation of Koenning’s misconduct was the catalyst for the coach’s departure. Now, neither will step on the field at Milan Puskar Stadium this year.

Jake Long is his likely replacement having played in 18 games so far during his WVU career if he can elude the injury bug — the senior missed his entire sophomore season after wrist surgery.

Assistant head coach and offensive line coach Matt Moore had the liberty of inheriting leadership in the trenches in his first year in Morgantown last season after coming with Brown from Troy to take a similar role at WVU.

Colton McKivitz would go on to be named Big 12 Co-Offensive Lineman of the Year and an Associated Press Third Team All-American following the season. He made 37 starts during his illustrious Mountaineer career.

On the other side of the line, Kelby Wickline upped his own career start total to 40 games at the right tackle position.

But those two stalwarts have since graduated, and former All-Big 12 guard Josh Wickline transferred to Oklahoma State, leaving Moore with more questions than answers going into this season.

Redshirt-sophomore Junior Uzebu (6-6, 298 pounds) will likely get the first shot at the left tackle spot with two years of experience backing up McKivitz. Junior John Hughes (6-5, 298) figures to get the opening crack at right tackle, but both are relative unknowns with a combined 13 career appearances.

Unfortunately for Moore, it’s not like the experience he lost had a particularly good campaign in 2019. WVU had a paltry running game, even by Big 12 standards, clocking in at 127th out of 130 FBS teams in rushing yards per game. A baffling number given the conference’s reputation for soft defenses.

But for offensive lines, continuity and a good system are often more important than sheer talent, so the Mountaineers could still see improvement in the second year of Moore’s system despite a lack of game experience.

From a depth standpoint, running back was one of WVU’s strengths at this point in camp a year ago with standout Kennedy McKoy and Leddie Brown returning.

To say that didn’t come to fruition would be the understatement of the century.

The Mountaineers had one of the worst running games in the country. Nobody with more than four carries eclipsed Brown’s 3.4 yards-a-carry average, and he led the way with just 367 yards rushing.

On the bright side, it’s hard to imagine a world where West Virginia fares worse on the ground.

McKoy graduated, but Brown is back this year, and it won’t get any easier with an inexperienced offensive line. Brown did catch 17 passes for 145 yards and a touchdown last season, so look for him to get more involved in the passing game if the line struggles to produce.

Brown had the longest play in West Virginia’s scrimmage, breaking free for a 43-yard burst.

Alec Sinkfield also returns. The 5-9, 184-pound back had 41 yards on 17 carries in 2019, seeing most of his action on special teams where he took the field on 142 plays, as he appeared in all 12 games. Expect him to get more burn with Martell Pettaway transferring to Middle Tennessee State.

If the defense can stay healthy, Doege continues his solid play and the running backs perform to the level Neal Brown expects, a winning season could be in the cards for WVU.