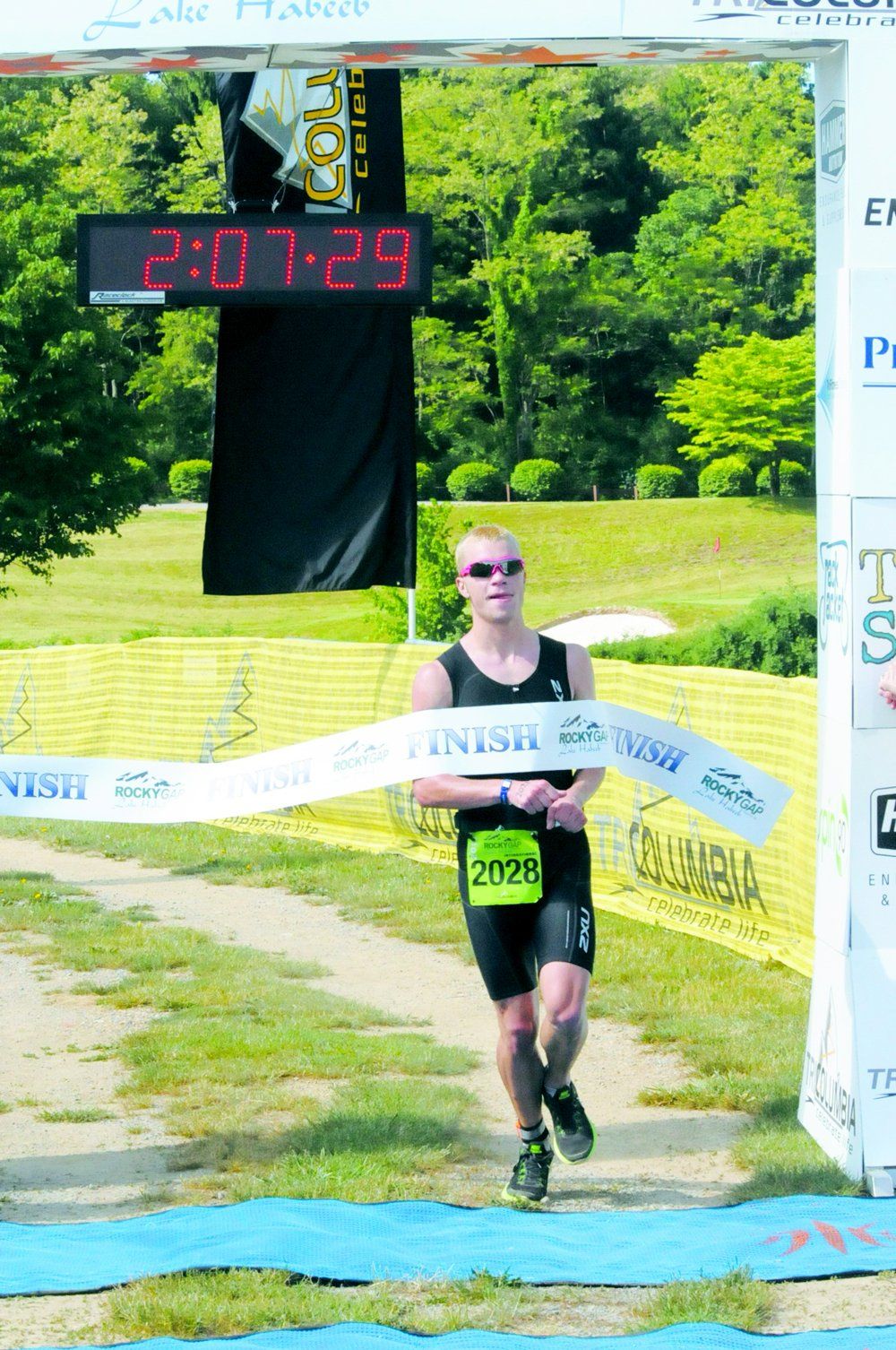 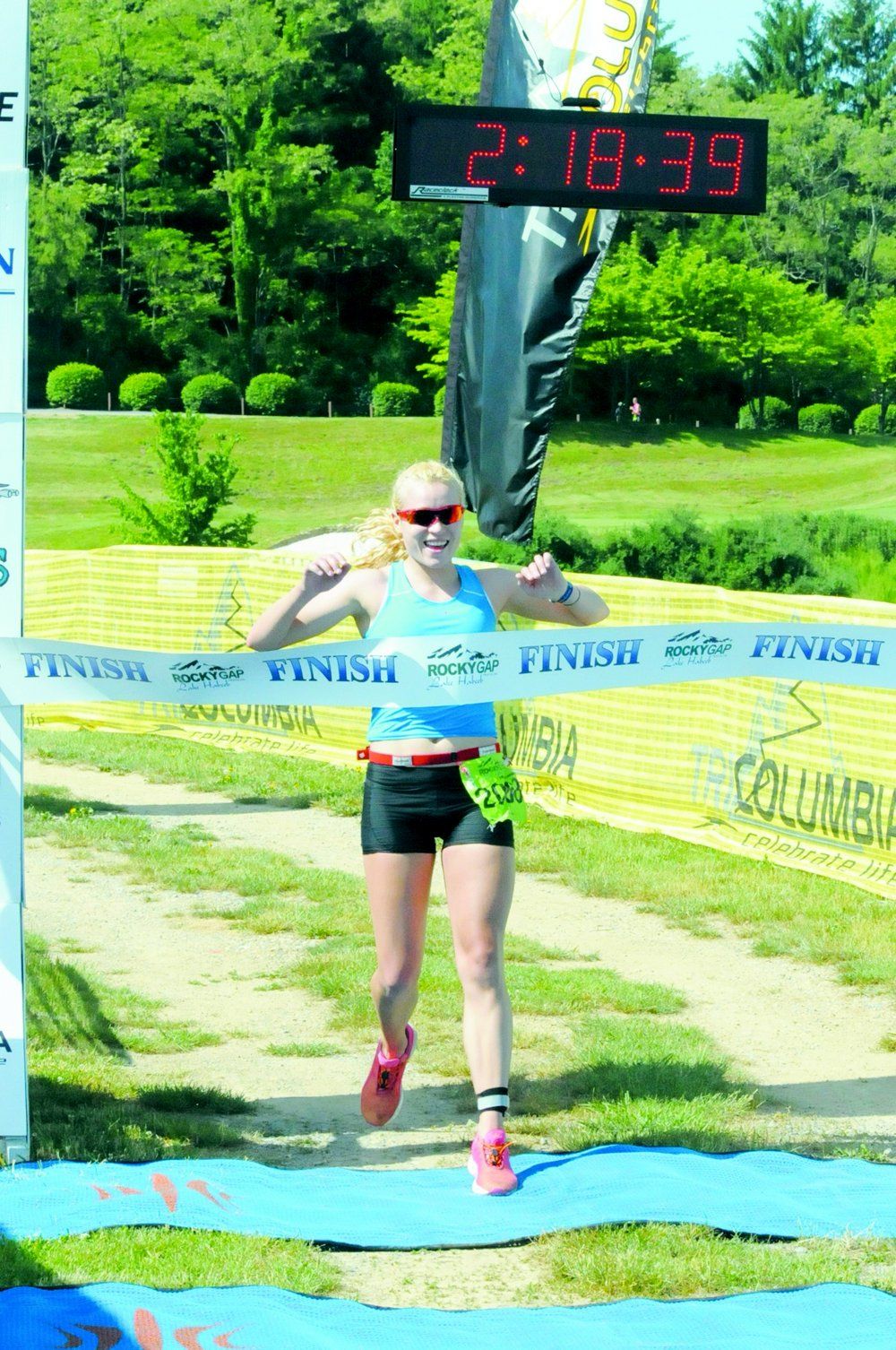 Lauryn MacFawn crosses the finish line as the female winner of the 26th Annual Rocky Gap Triathlon Saturday morning. Ian posted the best time overall time of any runner, while Lauryn had the third-best overall time.

Lauryn MacFawn crosses the finish line as the female winner of the 26th Annual Rocky Gap Triathlon Saturday morning. Ian posted the best time overall time of any runner, while Lauryn had the third-best overall time.

In the water, on the bike, on the road and, especially, at the finish line.

Former Allegany High stars Ian and Lauryn MacFawn swept the International Distance Triathlon in impressive fashion, and while both were former winners at the Gap, Saturday was the first time they both won the International — a 0.93-mile swim, followed by a 22-mile bike and 5-mile run.

Not only did they win, neither trailed after taking early leads with strong swims in Lake Habeeb.

Ian, a high school cross country and 1,600-meter state champion, won the Men’s International for the second year in a row with a time of 1:57:31 seconds. Eric Johnson, of Pittsburgh, was second in 1:58:21. They were the only ones to break the 2-hour mark

“Today I had a good swim and a much better bike than last year,’’ Ian said. “The key was definitely the bike. I’m pretty sure (Eric Johnson) had a faster run time than I did.

“Last year I got beat in the last two miles of the bike and had to make up the ground in the run. But this time I was ahead in the bike and that made all the difference.”

Now running at the College of William & Mary, Ian, 20, has been taking part in triathlons for about a decade, and seriously the last three of four years.

“I don’t get nervous for triathlons anymore. In college I’m basically a miler and an 800 runner. That’s where it’s really, really nervy, because it’s really fast the whole time. If you make any mistakes, it’s over. In triathlons, you have like two hours to make up for any mistakes. So, if you’ve done your training and you put forth a good effort, you’re going to do well.”

Lauryn, a five-time high school state champion in cross country and track who ran track and cross country at Syracuse, admitted biking was her least favorite stage. It didn’t matter though, because she had a huge lead out of the water, plus a strong run despite a blistered foot at the finish line.

Lauryn, 23, won the Women’s International by 18 minutes, and was third overall behind only her brother and Johnson, in 2:03:41. Allyson Morrison of Washington was second among the women in 2:21:45.

“My weakness is the bike. There just seems to be a lot of people better than me. The run is my favorite, because that’s what I used to specialize in at high school. And swimming ... I felt I  got lucky because I swam all through high school, so generally I’m pretty good at that, but it’s tough, though.”

“My dad has been in this triathlon for all 26 years,’’ Lauryn said of her father, Ian, a local veterinarian who was eighth in the Men’s Sprint. “He got us started really early. I started doing the Sprint part when I was 13. We had been doing the Sprints forever and it just kind of branched out from there (to the International Distance). Now I have a personal coach and an on-line training program.”

The family affair included Ian and Lauryn, father Ian, mother Cathy, and Lauryn’s boyfriend, Thomas Guadagnolo, a former lacrosse player at national power Syracuse. It was the first time all the MacFawns competed in the same triathlon at Rocky Gap, Lauryn said

Another former Allegany star and state champion, Loren Winebrenner, began the day by winning the Women’s Sprint, while Josiah Mueller, a golfer-turned-triathlete, won the Men’s Sprint.

The Sprint Triathlon is a quarter-mile swim, 8-mile bike and 2.5-mile run.

Winebrenner, 33, a past winner at Rocky Gap and the winner of the first Iron Girl Rocky Gap Triathlon last fall, grew up swimming at the Cumberland YMCA, and like the MacFawns had a healthy lead out of the water. The annual triathlon benefits the Cumberland Y.

“I swam competitively since I was 6, and when I got done swimming I ran cross country in high school and just kind of fell in it from there,’’ she said, explaining the draw to triathlons. Because she will be competing in an International later this month she chose the Sprint yesterday.

“I just try to go hard the entire time, and also try to pace myself. I’ve had some trouble with my knees, so the run is probably the hardest stage for me,’’ said the former cross country state champ.

“My whole childhood I played golf, competitively. I fell in love with triathlons my senior year in college and have been competing for about 10 years,” he said.

“I rode on a cycling team for awhile but nothing else, just high school golf. There are similarities, though. There’s a lot of mental toughness involved in triathlons, and that’s what golf’s all about when you think about it ... hitting a shot when the pressure’s on.”

Originally from Portland, Ore., Mueller, a nurse, and his wife moved to Baltimore so he could attend nursing school at the time. They have a nine-month old daughter, Daphne.

“The key for me is easy: No. 1, have fun. This is what I do with my free time, so it should be what I enjoy. I love biking because of the scenery and it’s gorgeous scenery out here, with all the old houses and the hills,’’ he said.

“I came out of the water pretty well. The guys in front of me are faster swimmers than me but I was able to keep them in sight. I think I made up some time on the bike, and I held back on the run a bit and it helped to have a little extra energy at the end.”

Mike Mathews is a Cumberland Times-News sportswriter. Write to him at mmathews@times-news.com