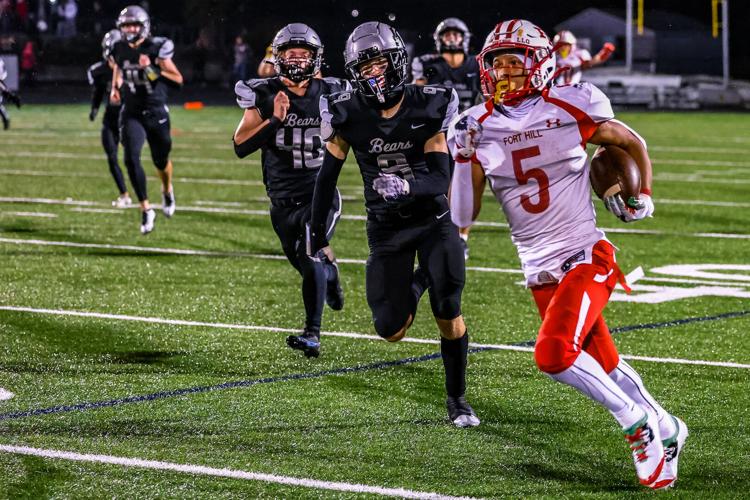 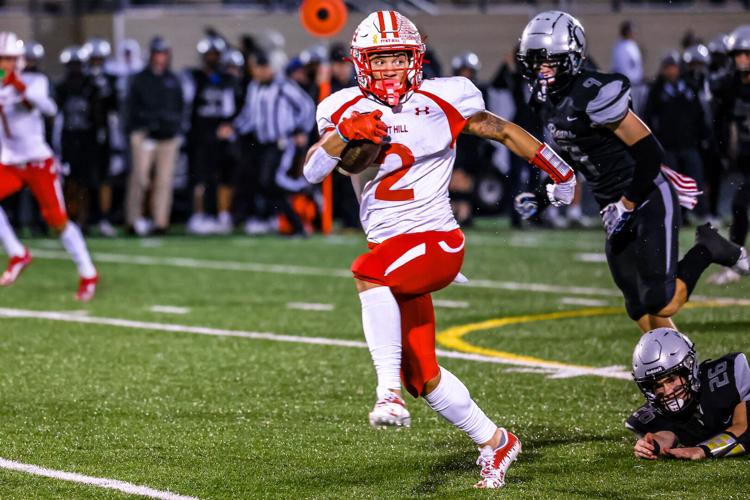 Fort Hill running back Tavin Willis steps through a tackle attempt from Oakdale's Jacob Leibowitz (26) on a 60-yard touchdown run during the second quarter on Friday night in Ijamsville. Willis rushed for 122 yards, and Fort Hill won, 49-21. 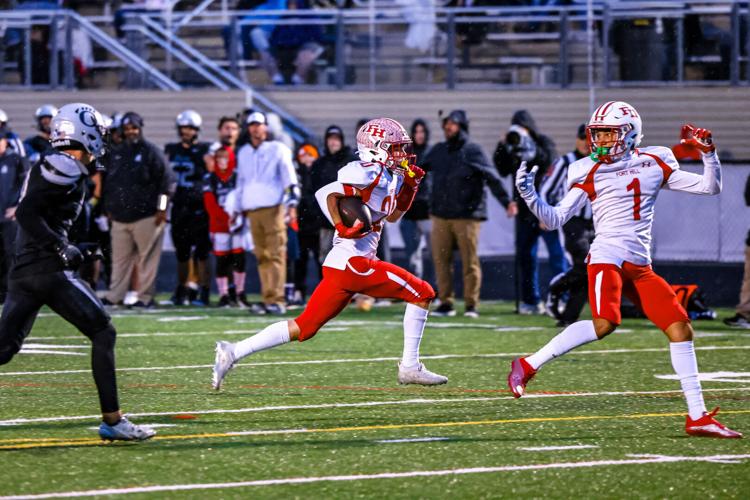 Fort Hill running back Tavin Willis steps through a tackle attempt from Oakdale's Jacob Leibowitz (26) on a 60-yard touchdown run during the second quarter on Friday night in Ijamsville. Willis rushed for 122 yards, and Fort Hill won, 49-21.

IJAMSVILLE, Md. — Despite playing in a different venue under dissimilar cold, rainy conditions — the Fort Hill-Oakdale rematch was every bit the same as the last.

On a Saturday afternoon a year ago, the Sentinels opened to a 28-0 halftime lead en route to a 42-7 rout at Greenway Avenue Stadium. There was no surprising the Bears this time around, but there was no stopping Fort Hill.

The Sentinels blitzed Oakdale by scoring touchdowns on each of their first six possessions to build a 42-7 lead, and despite a late charge by the Bears, they weren’t able to come back.

Mikey Allen, Tanner Wertz and Tavin Willis all topped 100 yards, and No. 1 Fort Hill accumulated more than 400 yards on the ground and 500 overall to pound Oakdale, 49-21, on Friday night to extend its winning streak to 18 games.

“Coming in here, this was touted as a really big game in the state,” Fort Hill head coach Zack Alkire said. “Lots of athletes on the field, and I’m glad that we showed up ready to play.”

Fort Hill and Oakdale, a Class 3A school ranked No. 12 in the state media poll and No. 6 among public schools, both entered Friday night with spotless 4-0 records, and the matchup seemed on paper to be primed for a classic.

Yet, Fort Hill dominated from the onset, taking a 35-7 lead into halftime to match its advantage after 24 minutes in the 2021 meeting, and Oakdale stopped the bleeding far too late.

The Sentinels racked up 483 yards on 43 carries, and Anthony Burns completed all three of his passes for 27 yards. Fort Hill had a 510-267 advantage in total offense by the time it was said and done.

Alkire credited the effort of his offensive line and the vision and patience of his backs as the keys to the scintillating rushing performance.

“It was all 11 guys,” he said. “Our offensive line was prepared, we challenged them all week to come off the line and be more physical than ever before. (Oakdale) has a number of Division I guys on their offensive and defensive lines. Our backs read the holes, read the blocks and we were off and running.”

Allen led the Sentinels on the ground with 11 carries for 169 yards and two touchdowns, the longest a 76-yard trot on a sweep play on the first play from scrimmage of the second half to up Fort Hill’s lead to 35 points.

The senior, who caught three passes for 27 yards, also shut the door on Oakdale defensively with a 44-yard interception return for a touchdown after the Bears cut their deficit to 21 points midway through the fourth quarter.

“I knew they were going to pass, so me and Tony (Palmisano) switched, I had the big No. 8 (Dominic Nichols),” Allen said of his pick-six. “Tavin tipped it, and I just followed the ball and picked it.”

“All the same play, it was all 32 hit it,” said Wertz, who finished with 148 yards and three scores on 13 touches. “Blockers did well, and I just saw the hole, made a few cuts and saw the end zone.”

Willis rushed for 122 yards and a touchdown on 12 carries. Following Wertz’s three house calls, Willis started Fort Hill’s fourth series by taking a halfback toss and accelerating 60 yards to the sticks to make it 28-0.

However, Fort Hill’s first-half defense was every bit as good as its offense.

Oakdale, led by an elite ball carrier with multiple Power 5 offers in quarterback Evan Austin, saw two of its first four drives end with three-and-outs and the other two end on turnovers on downs.

Austin eventually racked up 102 yards and a touchdown on 17 carries, but he was ineffective in the passing game, completing just 4 of 15 passes for 44 yards.

With Austin unable to get chunk yardage on the outside, and the Fort Hill secondary locking down the Bears’ vertical threats, Oakdale struggled offensively. The Bears’ didn’t score their first touchdown until the 2:02 mark of the second quarter on a three-yard rush by Rory Blanchard.

“We work out a lot, we do drills to imitate what happens in the game,” Willis said of the Fort Hill secondary. “Me, Mikey, Tony, Tanner, Jabil (Daniels), Steven (Spencer), all of them, we prepare for that.

“That was one of Fort Hill’s weaknesses, but we made sure that wasn’t one of our weaknesses last year or this year.”

Oakdale battled back from a 42-7 hole to cut its deficit to 21 points following a 35-yard rushing touchdown by DJ Moore with 23 seconds left in the third quarter. The Bears started with a short field after Aiden Blake recovered a Fort Hill fumble.

A 21-point lead in the fourth quarter is sizeable, but in high school football, it isn’t insurmountable.

“You could see the worries on some of the kids’ faces,” Alkire said. “I reminded the guys, ‘We’re in control here.’ ... We didn’t have the same success offensively in the second half as we did in the first, but the defense stood up where they were needed.”

After Oakdale forced a three-and-out, the Bears started a drive, down 21, on the Fort Hill 40 early in the fourth. Fort Hill’s defense responded forcing a turnover on downs.

The Sentinels then drove 56 yards down to the Oakdale 10-yard line, but a defensive lineman got a paw on Quinn Cohen’s 21-yard field goal attempt to give the Bears one final chance with 6:08 left in the game. Cohen was 7 for 7 on extra points.

That’s when the Fort Hill secondary rose to the occasion, and Allen returned an Austin pass for a touchdown to put the finishing touches on an important victory.

At 5-0, Fort Hill will have another battle of unbeatens next Friday night when it heads up to Frostburg to take on the second-ranked Mountain Ridge Miners (5-0), who handed No. 3 Frankfort its first loss on Friday, 36-0.

Fort Hill is hoping that matchup provides the Sentinel faithful with another feeling of deja vu.

“It’s gonna bring a lot of drama to the game on Friday. Playing up there is going to bring great theatre. We haven’t played up there in a long time, so we’re definitely looking forward to the challenge of next week.”