Residents question $4.7 million for projects on 'some of the wildest lands in Maryland' 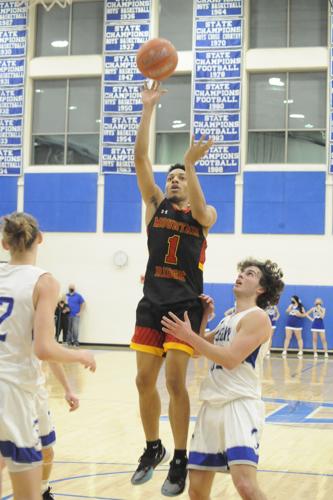 Mountain Ridge’s Amare Kennedy (1) shoots behind Allegany’s Owen Seifarth, left, and Chazz Imes during the second half of the Miners’ 54-43 victory Tuesday evening at Allegany. 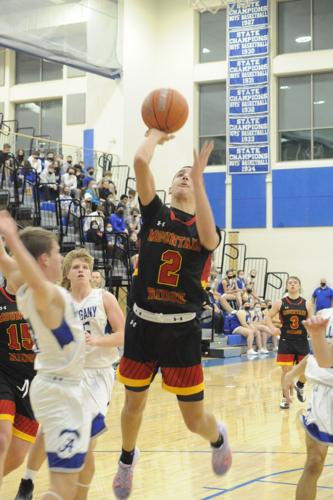 Mountain Ridge’s Amare Kennedy (1) shoots behind Allegany’s Owen Seifarth, left, and Chazz Imes during the second half of the Miners’ 54-43 victory Tuesday evening at Allegany.

CUMBERLAND — Tuesdays in the month of January haven’t been kind to the No. 1 seed in the boys Area Top 5. That didn’t change this week, as No. 3 Mountain Ridge pulled away from top-ranked Allegany, 53-43, atop Haystack Mountain on Tuesday night.

On Jan. 4, it was the No. 1 Miners who fell victim to being the top-ranked team, falling in double overtime at Southern. On Jan. 11, after being unanimously voted the area’s top team, Southern lost at home to then-No. 3 Allegany.

“I’m just glad we’re playing basketball again,” Mountain Ridge head coach Dave Hobel said. “It’s nice to have fans in the stands. The kids were out there playing, competing. It was two quality basketball teams going after it.”

Despite foul trouble and rebounding issues, the Miners were aided in the second half by their runs to open the quarters.

Staked to a two-point lead, 24-22, at halftime, Mountain Ridge opened with an 8-0 run in the third with baskets by Nathaniel Washington, Amare Kennedy, Bryce Snyder and Peyton Miller.

Allegany’s Owen Seifarth hit a layup in traffic to end the run, but the Miners called a timeout to try to sustain the momentum with 3:29 remaining.

The Miners went on a 5-0 dart after the timeout, opening up a 13-point lead with 1:42 remaining and effectively putting the game to bed.

Washington led the charge for the Miners with 13 points, while Kennedy tacked on 12. Snyder added nine points, Uma Pua’auli had eight and Miller finished with seven.

It was Washington and Kennedy who put the exclamation point on things, with both blocking shots in the waning seconds to seal the victory.

“You could call him a three-year starter, he started as a sophomore,” Hobel said of Washington, who orchestrated the Miner attack with nine second-half points. “It’s nice to have that leadership. It’s like having another coach, he’s like an assistant coach. It’s his team and he kind of runs the team.”

The Campers struggled to get much going consistently on offense. Zach Michael came off the bench to lead the team in scoring with 10 points, while Darian Bauer and Chazz Imes had seven apiece.

“Terrible performance,” said Allegany head coach Tedd Eirich. “That’s two games in a row we’ve played bad. Against Fort Hill we got lucky enough to pull out a win. Tonight, we weren’t so lucky. Defense was awful, we didn’t have any rotations. All the things that we talked about to defend them, we didn’t really execute. Our shooting was under 30%, our foul shooting was horrendous, our 3-point shooting was horrendous. So that sort of sums it up.

The Campers did find success on the glass — they had 29 as a team — and drew plenty of fouls through the night, already shooting foul shots in the one-and-one in the third quarter.

“We have to rebound and we stress that with a bunch of our guys,” said Eirich. “Caiden (Chorpenning) I see had 11 rebounds and we’ve got to have that from him. We don’t have humongous guys in the post that rebound, so everybody’s got to go do it and we stress that every game.”

After the Campers stopped Mountain Ridge’s 8-0 run in the third with a free throw, Washington knocked down a 3-pointer from the top of the key for a 35-23 lead, the Miners’ largest advantage up to that point. But Allegany showed plenty of fight, closing out the frame on a 13-3 run. They had a chance to tie the game at 38-all with 3.6 seconds left, but the Campers’ shooting woes from the stripe continued as both shots missed.

The play of Pua’auli, and later Camren Kifer, off the bench provided a spark for the Miners.

Allegany led 6-2 early on, but Pua’auli entered the game and came up with three steals, an assist and five points in the first quarter to send the Miners in front. His first points came on a layup that jump started a 9-0 run that put Mountain Ridge in front for good.

The play of Pua’auli was crucial throughout with Kennedy in foul trouble — he picked up his fourth in the third quarter.

“Both teams have good benches and that’s why you have a bench,” said Hobel. “We feel like we bring guys off the bench that do a good job. And that’s why you practice. All our players practice hard whether they play some or not much, and that’s what I told them in there. That’s important. We just tell them to keep practicing and playing hard and you never know when it’s going to be your chance. That’s why it’s called a team.”

Miller also picked up four fouls by the end of the third, and eventually fouled out, but Kifer entered and stopped the bleeding on the boards, grabbing rebounds when the Miners needed them most and getting a runner to fall off the glass to cap off their 7-0 run in the final period.

“That’s the way all our players are,” Hobel said of Kifer. “They just all work hard in practice and they don’t get concerned if they’re going to play or not. I just keep reminding them when it’s your turn, just be ready. That’s a perfect example right there. He was ready.”

Allegany (5-3) travels to Northern tonight before hosting a rematch on Friday with No. 2 Southern.

“I don’t know what happened between up there and coming and playing these last two games that would’ve changed anything,” said Eirich. “I know these kids are smart and they’re smart enough to know that what we’ve done the past two games is not going to get it done. We try to stress that every game’s very, very important and we didn’t seem that we acted like tonight was an important game. We just let one get away where I just don’t think our effort was where it needs to be.”

Mountain Ridge (8-3) stopped a two-game losing streak with its win. It travels to Fort Hill on Thursday before hosting Northern on Friday.

“I could never be a football coach because if you lose on Friday, I’d have a hard time getting through the week,” Hobel said. “But at least in basketball, you have short-term memory. You don’t win, you don’t win, oh we got this game, now we win, you got to forget about this, now we go Thursday. I could never coach football because I’d go crazy.”