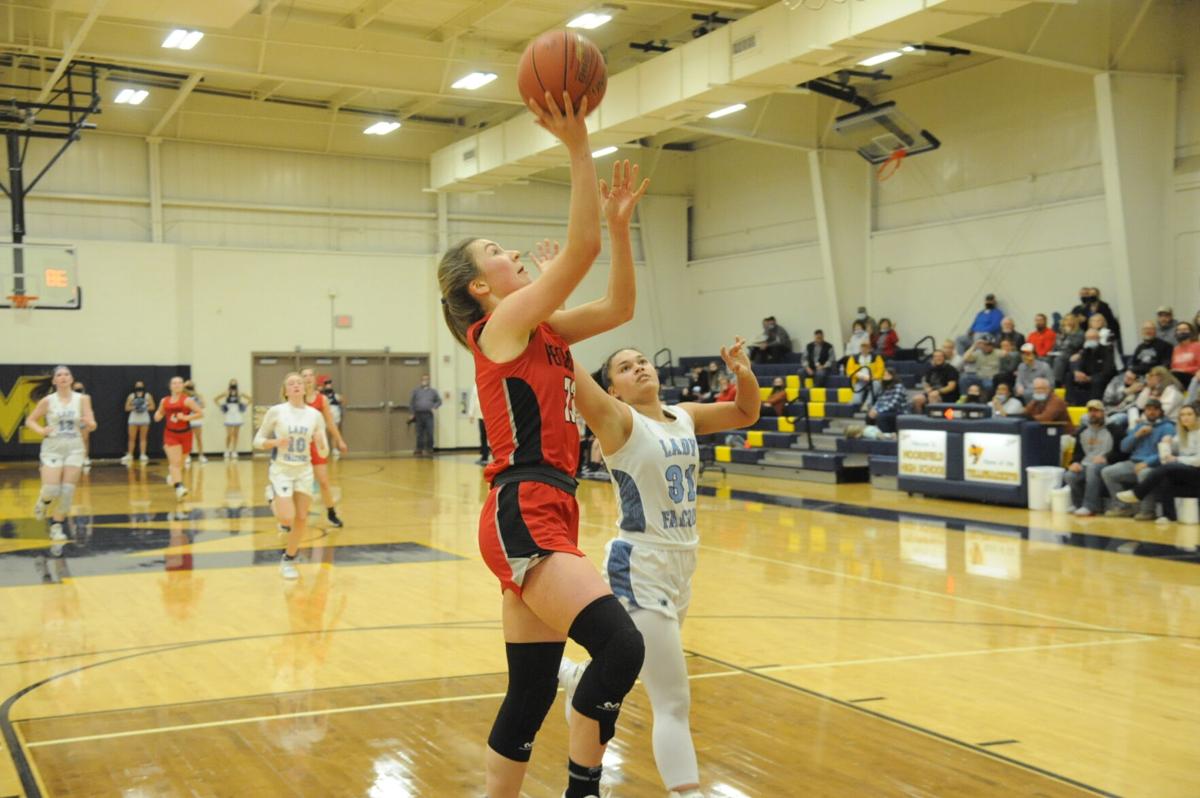 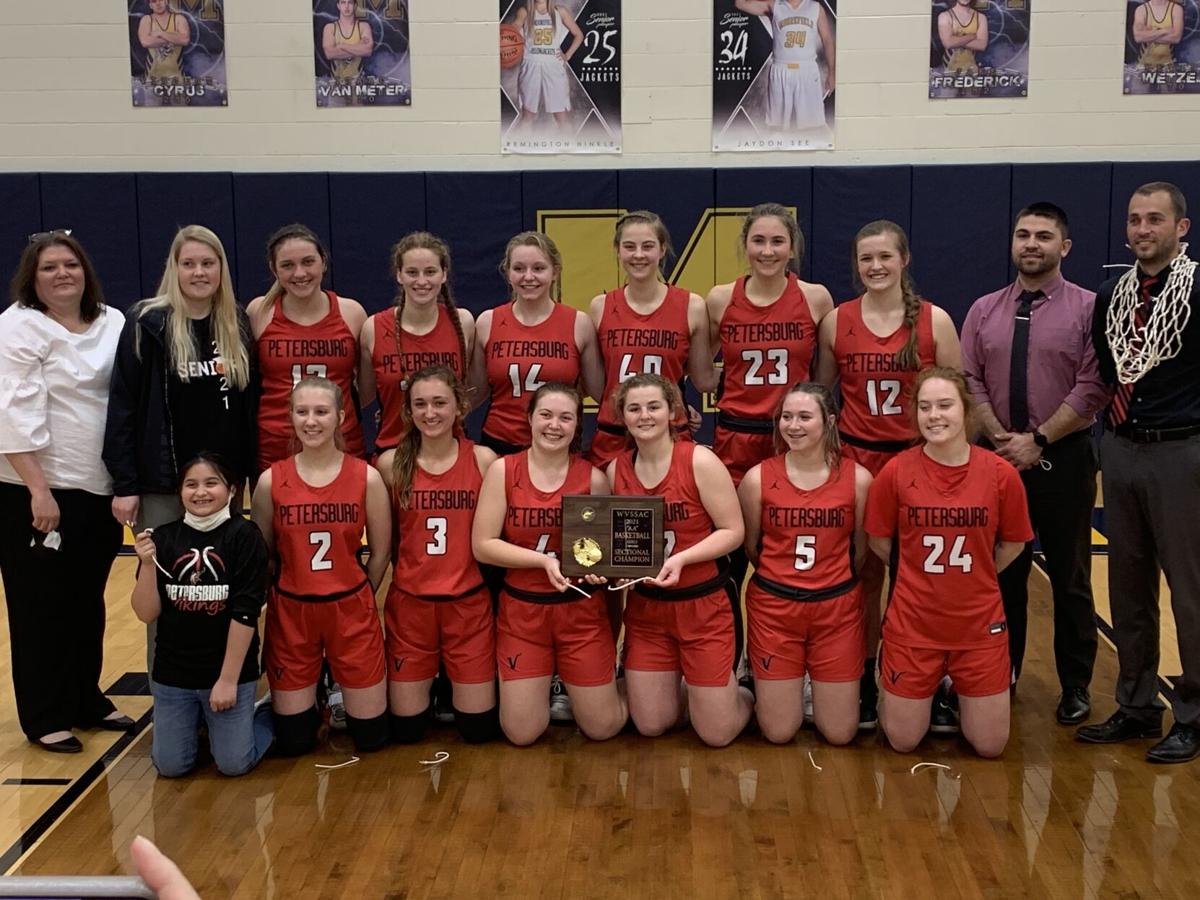 MOOREFIELD, W.Va. — When Petersburg head coach Jon Webster lifted the net, freshly chopped from the Moorefield gymnasium, the Vikings and their supporters let out a roar of exultation.

Guided by Jenna Burgess’ 29-point outburst, the Vikings led wire-to-wire to beat the Falcons, 64-47, to capture the Class AA, Region II, Section 1 crown — avenging their loss at the same stage to the same team a season ago.

“I’m just really excited for the girls, they’ve worked really hard the past several years,” Webster said. “They work together, they play together, and they just don’t care who gets the credit. Just a really good team win, and we’re excited to be able to host a regional.

“We brought most of our players back, and our girls were really determined to have that chance again. They were ready to play tonight.”

The neutral-site bout was a rubber match of the area’s two best squads.

From the onset, the third edition rapidly trended away from its nail-biting predecessors.

After Petersburg broke a two-all first-quarter tie with a 9-0 run — capped by an old-fashioned 3-point play and another score in transition by Kym Minnich, who finished with nine points — it never trailed again.

The Vikings led by double digits off-and-on during each quarter and for most of the second half, leading by as many as 18 at one point in the fourth.

Frankfort got its usual dominant outing from Perdew and 10 points from Larae Grove, but only two other players — Izzy Layton (5) and Arin Lease (2) — combined for the team’s remaining seven points.

“It was a tough one for us,” Frankfort head coach Mike Miller said. “We haven’t had a beatdown like that in a long time, and maybe it was needed. I don’t know. ... We have some things coming back in our favor with Halley returning, she was missed tonight. She was missed sorely, but I didn’t think she’d be missed like that.

“Petersburg came out and played with heart and compassion, and I know that starts with the leader. He had his girls ready to play. I thought our girls were ready to play, and they weren’t.”

Petersburg’s offense was like poetry in motion for stretches in the half-court. The ball rarely stuck, and the Vikings’ unfettered confidence was the story of the night.

On one second-quarter possession, all five Petersburg players touched the ball, and the fourth pass found a wide-open Carley Turner in rhythm for one of her three treys off the bench. She finished with 11 points, all in that second frame.

The Vikings got production from everywhere, as Kayla Lantz tallied six points, Mickala Taylor scored five and Kennedy Kaposy chipped in four. Kaposy and Turner combined for 15 bench points — the Falcons had none.

“I thought we moved the ball well offensively,” Webster said. “Just always looking for who’s open, we had our heads up the floor. We got a few easy baskets, and defensively we were pretty locked in.”

It isn’t often that an opposing player can match Perdew offensively, but Burgess was up to the challenge. She nearly crossed the 30-point threshold, tallying 19 after halftime to back up a 27-point outing against Moorefield in the section semifinals on Tuesday.

The senior hit a pair of clutch triples in the fourth, the latter of which gave Petersburg a 59-41 lead with 4:41 left, all but ending any hopes of a comeback.

“She’s playing with a lot of confidence,” Webster said. “She misses a shot, she’s not letting it bother her. She’s just looking to take advantage of every opportunity she gets, and she’s really making them count.”

Burgess was also involved in the game’s climax. Lease was stripped at half court and was met on the floor by a diving defender. Petersburg came out on top of the scramble, and an outlet pass hit Burgess for an easy lay-in to push the Vikings’ faithful into a frenzy and Miller into calling a timeout down 45-32 late in the third.

Even with a depleted roster against a Petersburg buzzsaw, Frankfort was still within striking distance after it cut the deficit to 47-37 a minute later following a deep Perdew triple, one of her 12 field goals. But that’s as close as it got and the Vikings won pulling away.

The Falcons struggled to crack Petersburg’s 2-2-1 full-court press with Perdew and Grove sharing the bulk of the ball-handling responsibilities in the absence of their starting point guard.

“We knew we were going to see a 2-2-1 press, we’ve seen it against North Marion, Fairmont Senior, all the elite teams that we’ve played in years past,” Miller said. “We know how to beat it, we knew it was coming.

“It hurts when you don’t have a ball-handler who can take the top off of the defense, but at the same time, we’ve been preaching patience over the last week or so. I felt like at times we tried to hurry it, and that’s where we got in trouble.”

The saving grace for Frankfort is that its season isn’t over — both teams advanced to co-regional finals with Friday’s win or loss. The winner of those region matchups moves on to the state tournament in Charleston.

Petersburg gets a home contest on Thursday against Braxton County, and the Falcons face Trinity Christian on the road.

“I’m really excited that we’re going to be able to play (the regional final) on our home floor,” Webster said. “Get another game at home for these girls that have played so many years together.”