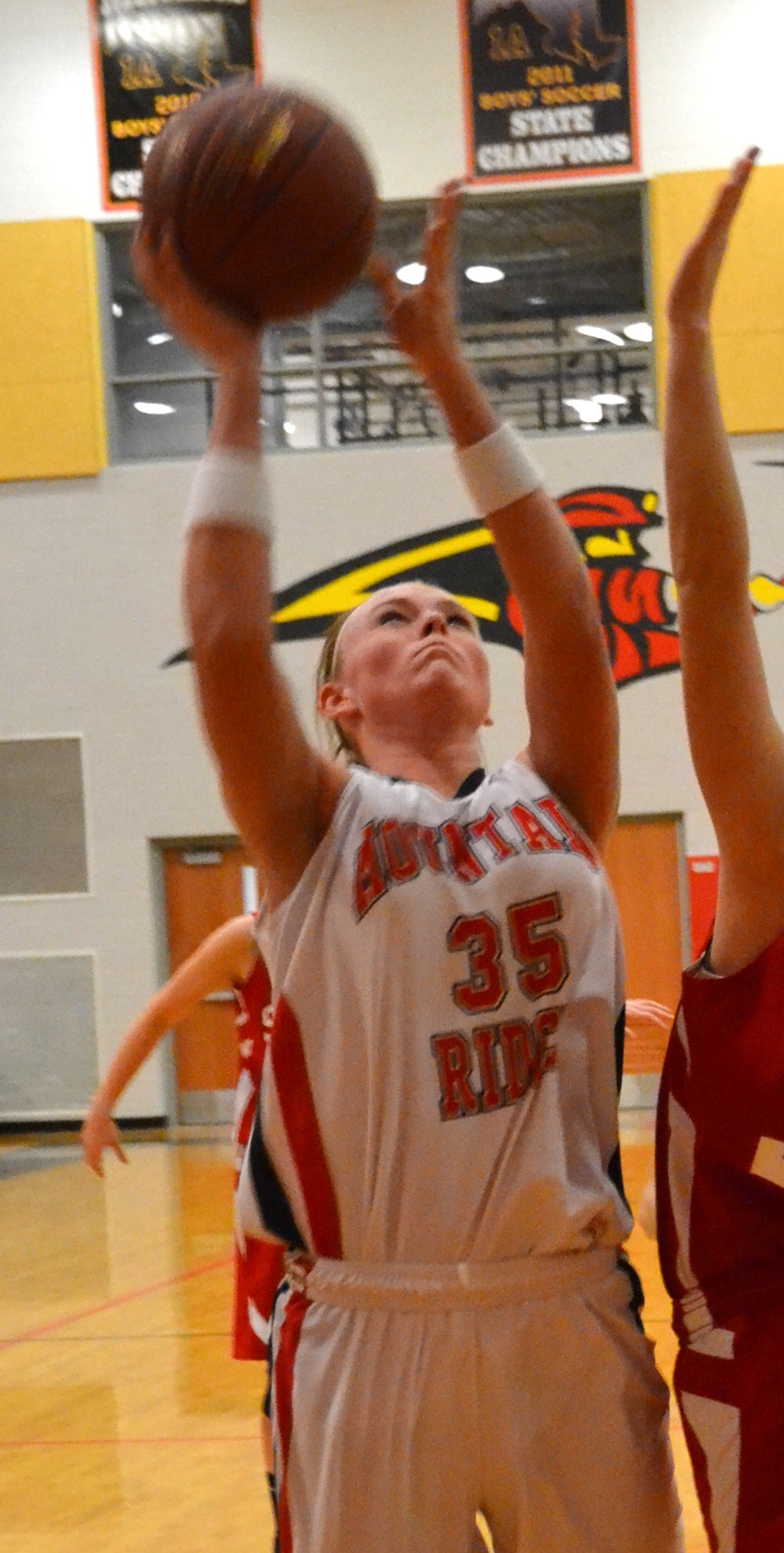 CUMBERLAND  — One player spent the last four years helping Mountain Ridge through one of the most successful runs in girls atheltics that the area has ever seen, while the other player has used the last three years to guide Fort Hill into the upper-echelon of the area’s girls basketball teams.

Both proved more than a handful for opposing coaches to plan around and because of that respect the Miners’ Shae Winner and the Sentinels’ Alesha Jackson have been selected as the first pair to ever share the Cumberland Times-News Girls Basketball Player of the Year award.

Winner led Mountain Ridge to a 19-4 record and into the Maryland 1A West Section finals where they eventually lost to Southern. The Miners, who finished second in the final Times-News Area poll, suffered three of their four losses to the No. 1 Rams.

Jackson guided the Sentinels to a No. 3 ranking in the final Times-News poll with a record of 14-7 before falling to Southern in the sectional playoffs.

Winner and Jackson won a tightly contested race for the award by receiving three votes apiece. They edged out Allegany senior Courtney Landis, who finished with two votes. Three other players received one each.

The Cumberland Times-News Player of the Year and All-Area Teams are voted on by the head coaches of the girls basketball teams in the Times-News coverage area. Of the 12 coaches who submitted nominations, 11 returned ballots to be counted.

Jackson becomes the third girl from Fort Hill to earn player of the year honors. The previous winners were Lindsay Holliday in 2006 and Becky Vance in 2003.

Winner becomes the first Mountain Ridge player to be given the award, although Beall’s Kacey Kahl won in 2005 and Westmar sported two three-time winners in Dawn Sloan (1990-92) and Jill McGowan (1995-97).

Miners coach Valery Broadwater saw something in Winner as soon as she stepped on the floor in the Mountain Ridge gymnasium as a freshman.

“Her size, our need for an inside presence and her ability to score, as well as overall athletic ability, were a few of the reasons that I brought her up early to the varsity,” said Broadwater.

Winner’s coach then pointed out how she developed her mental game to catch up with her skills.

“I have seen the most growth in Shae in her understanding of the strategies involved in the game and learning to counteract whatever the defense would throw at her. She also grew as far as how she handled the pressure of being the key player that the opponent was trying to stop.”

Jackson’s journey took a year longer to reach the varsity level and may have required more work than Winner, but the result was similar.

“Alesha is a very gifted athlete and she has worked very hard to become the player that she is,” said Fort Hill head coach Amber Waltz.

“I really saw a change in her between her junior and senior seasons. We won the conference, area, region and made it to the state final four her junior season and that success caused her mindset to totally change. She wanted to reach that level again.”

Jackson finished her senior season as the area’s second-leading scorer by putting up a 15.4 point average over 21 games. Only Northern’s Kirsten Rayner’s 15.7 average was higher.

“The best part of her game was was her offense,” Waltz said. “She loved to score. She spent hours in the gym working on her shooting and offensive moves.”

The Sentinel scoring threat spent all but four games in double figures and opened the season with eight straight contests of at least 10 points.

She broke the 20-point barrier on three occasions, maxing out with a 30-point effort against the Rams, and shot the lights out in a win over Hampshire.

“She was on fire against Hampshire — shooting 11 of 14 and scoring 25 points in limited minutes. Even other coaches were commenting on her shooting.”

Winner was a few points back of Jackson scoring-wise, coming in at 12.6 points per game (tied for eighth in the area), but averaged 7.0 rebounds to Jackson’s 5.0.

“She has a good mix of both offense and defense that she brings to the court,” Broadwater said. “She was constantly a threat on offense both from the perimeter and inside, and she had great passing skills for a forward/center. On the defensive side she was a force to be reckoned with on the boards, and was great at anticipating — which made her a threat to steal the ball at all times.”

Winner also proved extremely consistent during her career. She averaged 12.5 points (1,163 over 93 games) and 9.6 rebounds (839 in 93 games) to finish her career just south of averaging a double-double.

One of the standout moments that Broadwater remembers from Winner’s senior season was the night she scored her 1,000th point.

“Some players would be anxious and pressing to get those six points, and possibly struggle due to the pressure. Not Shae. She scored the first six points of the game for us and joined the 1,000 point club at Mountain Ridge before the first quarter ended.”

Both coaches had nothing but praise for the character of their all-star players.

Talking about her four-year standout, Broadwater said “She was the ideal player to coach. She is dependable, reliable, talented, and above all, open and receptive to ideas to assist in improving her skills and overall game.”

Waltz also talked about the pleasure of coaching Jackson.

“Alesha is the type of player that coaches dream of having. She works extremely hard, she is very competitive, she wants to be the best at everything and she is very positive and supportive of her teammates and coaches.”

Waltz pointed to her player’s relationship with her teammates as what she’ll miss the most.

“The hardest thing to replace with Alesha leaving is her leadership. She went 100 percent every single day! She understood that for us to be the best we could be, she had to be the best she could be.”

Broadwater may have touched on the most sobering aspect of high school atheltics when describing how to fill a void left by players like Jackson and Winner.

“Shae’s loyalty to Mountain Ridge and girls' athletics, and her respect, dedication, and receptiveness to becoming the best possible athlete she can be will be the hardest thing to replace.

“If it is replaceable at all.”

Chris Appel is a sportswriter for the Times-News. Contact him at cappel@times-news.com

Franklin "Frank" Muir of Hammond Heights, Westernport, died Wednesday, Jan. 12, 2022, at his residence. His wish was to be cremated with no viewing or funeral services. Fredlock Funeral Home, Piedmont, is assisting the family with arrangements. www.fredlockfh.com.