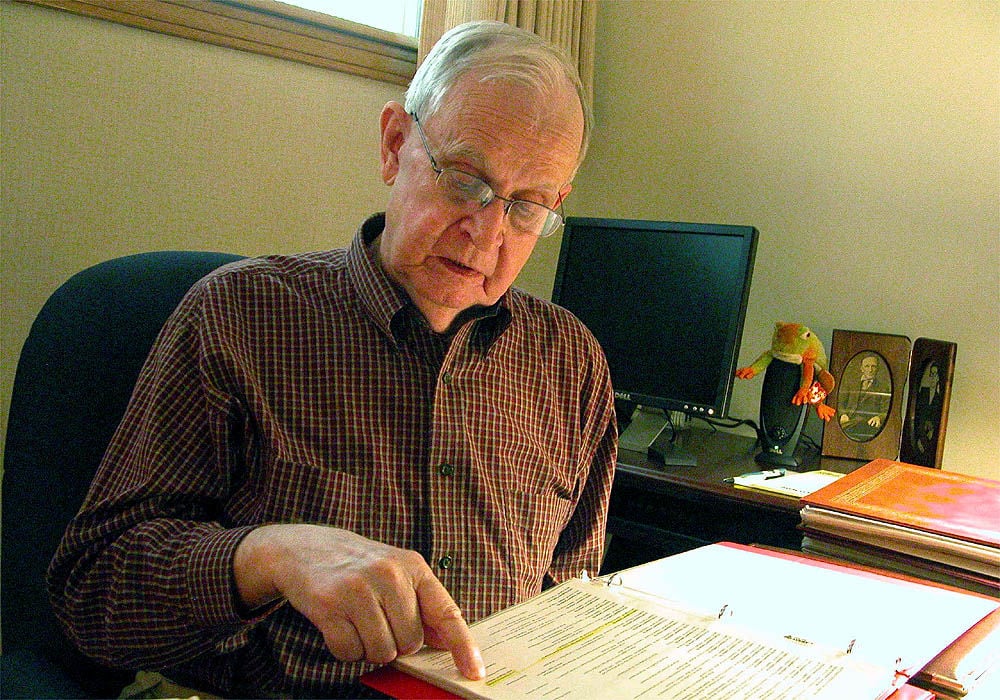 World War II veteran Kermit Clower looks at an album of newspaper clippings and other war memorabilia in the study of his LaVale home. 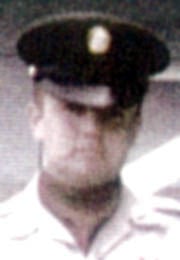 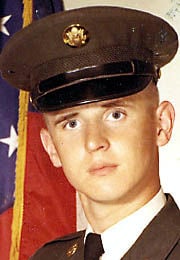 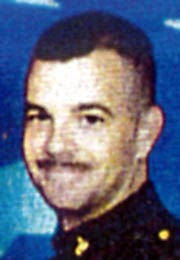 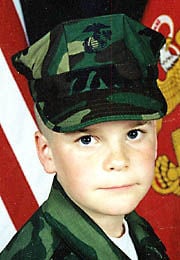 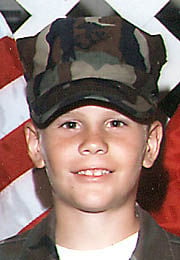 World War II veteran Kermit Clower looks at an album of newspaper clippings and other war memorabilia in the study of his LaVale home.

CUMBERLAND — Kermit Clower said he doesn’t need to be recognized for what he did during World War II; those bounties will be reaped at another time. He is, however, proud of his military service and even more proud that duty to this country has extended into the fourth generation of Clowers. “I’m not here to tell a heroic story, but to encourage young people,” he said. “This country is getting in bad shape and they need to go in the service and get a good education. It’s the most education I received in my life.” Kermit began his service in the U.S. Army in 1944 at age 18. He spent 17 weeks in basic training with the tank destroyers in Fort Hood, Texas, then was transferred to combat engineers at Camp Gruber, Okla. “I was just tickled to death,” said Kermit, who quit high school at 17 to help on the family farm in Romney, W.Va. “I learned and learned and learned.” His first deployment was to Germany with the 42nd Rainbow Division, where troops headed to the Rhine River near the German border. On the way over, an enemy submarine tried to sink his troopship. He was in combat for nine months — from then until the end of the war. “I knelt and said, ‘I know we’re getting there and I don’t know what I’ll do if I have to shoot a man,’ ” he recalls. “From then on, I had no trouble.” On the Rhine at Remagan, the engineers division built what was called a Bailey Bridge, on which more than 9,500 troops plus equipment crossed. One time while on patrol, a portion of the bridge fell, taking five men with it. Kermit went in and pulled all five back to land. They were all dead, but he wanted their mothers and wives to know where the men had died. He still suffers from back pain and wears a brace from another incident on the bridge. The troops were fired upon and Kermit fell down 34 concrete steps; the second round, he jumped to his left and fell in. The troops later tore down the bridge and moved it to Klobetz, but another part of their mission was to enter the concentration camp at Nordhausen, where troops were ordered to steal as many rockets and other equipment as possible. The other part of the mission was to capture as many scientists as possible. Kermit won’t say if the mission was successful. His unit also was ready to invade Japan when the atomic bomb was dropped, ending the war. During his tenure, Kermit’s father died and he re-enlisted for another year. He served in security with the Manhattan Project at Richland in Hanford, Wash. The atomic bomb plant, where his wife of 60 years come July 3, Maxine, also worked, was 41 miles long, he said. Kermit, who doesn’t want his service to be glorified, wouldn’t accept any medals for heroism or bravery. Discharged as a corporal, he also didn’t seek promotions in rank. “My rewards will come later,” the LaVale resident said. The Clowers are proud of their sons, grandson and great-grandsons, who are creating a fourth generation of military service. K. Paul Clower Jr. was drafted in the Vietnam era and served from 1966-69, while their other son, Michael W. Clower, volunteered for service from 1967-69. Both were with the Army in Germany with a transportation unit. Maxine and Kermit returned to Germany in 1969 and visited many of the places Kermit had seen 25 years earlier. Paul lives in Romney, while Michael is in Bruceton Mills, W.Va. Military service continues with Gunnery Sgt. Chris Clower, Paul’s son. A career Marine, he enlisted in 1989 and was one of the first into Afghanistan. He has served in Operation Desert Shield and Operation Desert Storm, Bosnia, Operation Deny Flight and Operation Enduring Freedom. He is stationed at Camp Lejeune, N.C. Chris’ two sons, Jared Paul, 12, and Christopher Jordan, 8, are carrying on the family’s tradition as Young Marines at Camp Lejeune, where they are a corporal and lance corporal, respectively. Neither Maxine nor Kermit worries about their offspring being in the military even though they believe the situation in Iraq won’t end soon. “I don’t really worry,” Maxine said. “In fact, when both our boys were in the service during Vietnam, we didn’t actually worry about them. We felt they had been trained well. My faith in the Lord takes me through.” Kermit belongs to the Veterans of Foreign Wars and American Legion as well as the Veterans of the Battle of the Bulge. He said World War II veterans should be in the schools talking to students about their service and the need for them to join. “I firmly believe that,” Kermit, who earned his high school diploma and spent 41 years in construction retiring from Rish Equipment in 1983, said. “My father wrote me a letter when I was in Texas training. He was telling me, ‘It’s good to know you’re going to do your part in the biggest job ever man has had to do.’ ” Maria Smith can be reached at msmith@times-news.com.